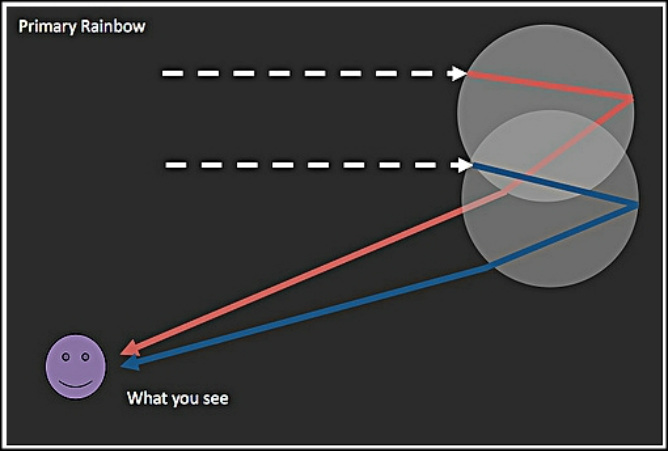 We all know rainbows are beautiful, but the following background knowledge strengthens our ability to truly understand them!

What is a rainbow?

A rainbow is defined by Merriam and Webster’s Dictionary as:

1. An arch of colors formed in the sky in certain circumstances, caused by the
refraction and dispersion of the sun's light by rain or...

2. Any display of the colors of the spectrum produced by dispersion of light.

What are the colors of a rainbow?

The real array of colors of a rainbow is infinite.  Each color typically blends into the next so that the entire spectrum of colors are actually present. However, there are only about 100 colors within the color spectrum that are actually distinguishable.

What gives the rainbow its shape?

The rainbow appears as an arch in the sky.  This is caused by the refraction (or bending) of white light through the airborne water droplets being broken up into its individual colors.  Each individual color has a particular wavelength and, through this, the amount of deviation can be calculated. For example, red light coming from the sun is reflected 42 degrees away from its original direction whereas blue light is refracted at 40 degrees.

The deviation in its refraction angle produces an arch.  However, the arch isn’t the complete rainbow all of the time.  Very often, if your viewing angle is correct relative to where it is and the location of the sun, the rainbow can appear circular.

When do you see a rainbow?

You can see a rainbow in various guises.  In order to see a rainbow as a function of the passing of a natural occurrence (such as a rainstorm), the best times to see it is when the sun is lower in the sky while the temperature is warmer.  So the best time to see a natural rainbow is early to mid morning and late afternoon to early evening in the summer.  Rainbows can occur at
night, but they tend to me more rare in occurrence.  Also, rainbows can be spotted in man-made water occurrences (such as running a sprinkler) and in other natural phenomenon (like in the spray coming off of a waterfall).  The only season when rainbows do not occur is winter, in the climes that get cold. This is because the airborne water droplets necessary for the rainbow to occur freeze before they hit the ground.

What Makes a Rainbow?

The most obvious components of a rainbow are airborne moisture (such as rain) and a source of light.  It’s easy to say “rain and the sun make a rainbow” but it’s not always true.  Sprinklers distribute mist adjacent to its main stream of water.  Though rare, rainbows do occur at night when all that is available to create the rainbow is moonlight (though to be fair, those are  typically referred to as “moonbows”).  And, lastly, you can also simulate the rainbow (at least the color presentation) using a light source and a prism.

How is a Rainbow formed?

Why is the “top” of a rainbow red and the bottom, blue?

When a rainbow is formed, the light is split off into different wavelengths and is both refracted and reflected within the droplet of water at different angles.  The steepest angle is the red wavelength (42 degree angle as mentioned above) and the shallowest is the blue wavelength (40 degree angle).  Therefore, the red colors will be on top and the blue colors on the bottom. It is impossible for an observer to see a rainbow from water droplets at any other angle.

What is the order of the components of a rainbow relative to your position on the ground?

If you are viewing a rainbow from the ground, then you will be staring directly at the rain or airborne water droplets.  The sun will be either at your back or far enough back relative to your head to deliver light at the proper angle in your line of sight to produce a rainbow.  It is for this reason that you can have many different people in the same area and each person, if at the
proper angle relative to the sun or light source, will see a different rainbow.